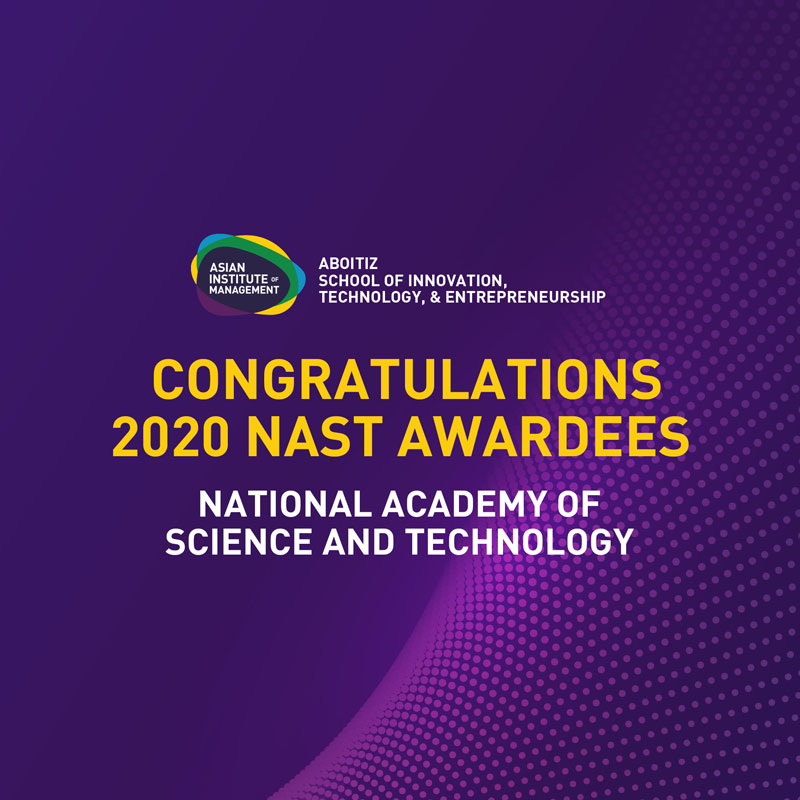 Dr. Christopher Monterola and Dr. Erika Fille Legara, pillars of AIM’s Aboitiz School of Innovation, Technology, and Entrepreneurship (ASITE) were conferred the rank of Academician and Outstanding Young Scientist respectively by the National Academy of Science and Technology (NAST), the highest recognition and scientific advisory body of the Philippines under the Department of Science and Technology.

In bestowing the rank of Academician to Dr. Monterola, he becomes a perpetual member of NAST. The recognition acclaims his outstanding contributions to science and technology in the country and abroad. One of the mandates as Academician of NAST is to advise the President and the Cabinet on matters related to science and technology. Prof. Dr. Chris is a well-published scientist; in recent years, he has published in some of the most prestigious journals in complex systems, artificial intelligence, transportation, aging, demographics, and basic research. On top of the academic publications, Dr. Monterola has led multimillion-dollar research and development projects with various sectors of society. He has also been responsible for training and mentoring young scientists and data scientists on an international level; one of his mentees, Dr. Erika Legara, is incidentally this year’s Outstanding Young Scientist. At AIM, he wears many hats: School Head of ASITE, Executive Managing Director of the ACCeSs laboratory, and holder of the Aboitiz professorial chair in Data Science.

Dr. Legara is one of this year’s 12 Outstanding Young Scientist awardees. Her exceptional work in computational physics, complexity science, artificial intelligence, and data science has attracted prominent acclaim. Dr. Erika has over 25 peer-reviewed scientific publications in different fields under the umbrella of computational physics, data, and modeling and simulations—this is in addition to her more than 50 conference publications and scientific presentations. Just as important are her contributions to Philippine education, designing, and implementing the country’s first-ever data science program at AIM that has been considered top 3 in analytics program by Eduniversal in the whole of Far East Asia. Together with Prof. Monterola, she provides invaluable assistance in crafting the Philippine government’s AI roadmap.